John Bauer (1882-1918) was a Swedish artist chiefly famous for his paintings and illustrations, including the ones he did for the early editions of the book series ”Bland tomtar och troll”, an anthology of Swedish fairy tales and folklore. In English, this series is known as ”Among Gnomes and Trolls”. Bauer´s illustrations of Swedish fairytales and legends has had a huge influence on how we today imagine these creatures and characters.

Bauer moved from Jönköping to Stockholm to study art at the age of 16. During his early career, he travelled to Lappland in northern Sweden, to Germany and to Italy – journeys that would come to have a major influence on his artistic development.

A significant part of Bauer´s total production are watercolours, but he also created other things, including oil paintings and frescos. One exampel of a wallpainting by Bauer is the fresco ”Den helige Martin och tiggaren” (known in English as ”Saint Martin, the Holy”) on the wall of the Odd Fellows building in Nyköping.

Examples of museums in Sweden where works by Bauer are on display:

The family lived in Jönköping where they ran a thriving c>harcuterie >business. >

The young John Bauer spent many summers at Villa Sjövik, the family´s summer house by the lake Rocksjön. For the rest of his life, this environment remained very important to Bauer.

The sixteen-year-old John B>auer moved from Jönköping to Stockholm to study art at Tekniska skolan (today known as Konstfack / >University of Arts, Crafts and Design>) and Althins målarskola (Althin’s School of Painting). >

After two years in Stockholm, he was accepted to Kunglia Akademien för de fria konsterna (The Royal Swedish Academy of Fine Arts) and he commenced his training there at the fall semester of 1900.

In the summer of 1904, Bauer travelled to Lappland in northern Sweden, and this trip would come to have a major influence on his art.

Bauer was the youngest of the various artists hired by the publisher Carl Adam Victor Lundholm to illustrate an anthology of Swedish fairy tales and folklore, and he spent his time in Lappland eagerly seeking inspiration for his comming work.

In Lappland, Bauer made pencil sketches and watercolours, and took a lot of photographs, while simultaneously trying to establish rapport with the Sami people living in the area. He wished to learn about the Sami culture, and he captured details from Sami dresses, tools and other items in his sketches. Some of these details would later surface in his illustrations of fairytales and legends, and Bauer also used photographs from his Lappland trip as inspiration for his art. 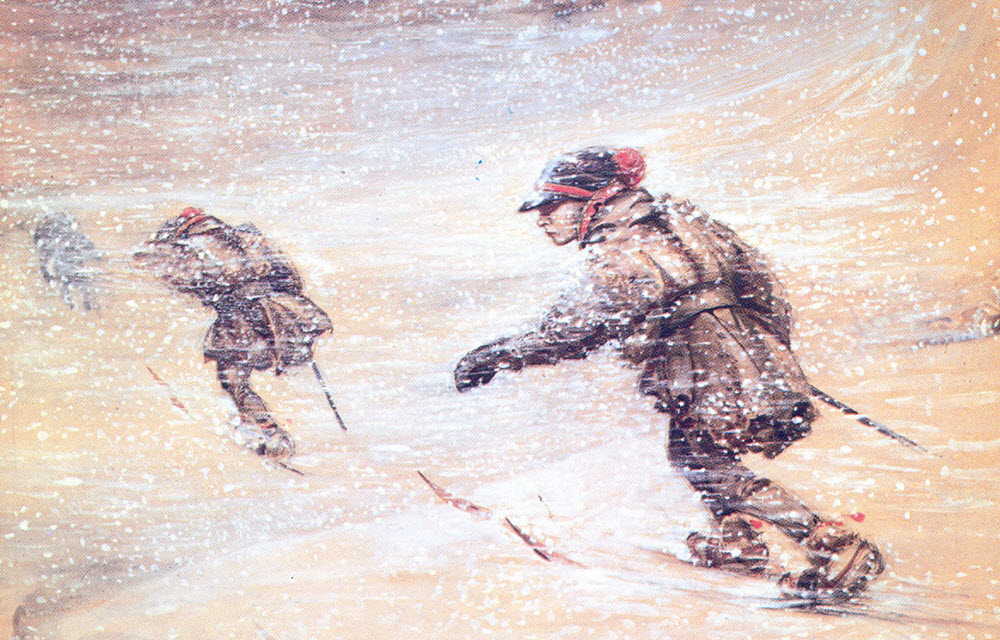 John Bauer met his future wife Esther Ellqvist (1880-1918) at The Royal Swedish Academy of Fine Arts, where they had both enrolled for the fall semester of 1900.

They married in Gränna in 1906, and Ellqvist-Bauer reluctantly ceased her formal art studies. 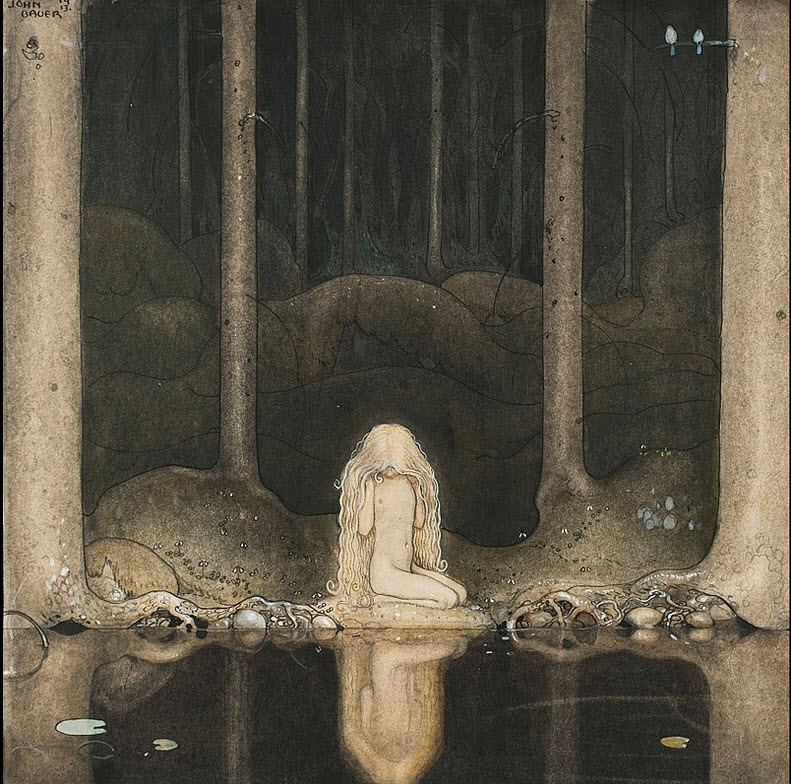 Their son Bengt Olov (whom they called Putte) was born in 1915. Bauer´s painting ”Rottrolen”, finished in 1917, depicts Putte sleeping among the trolls of the forest. 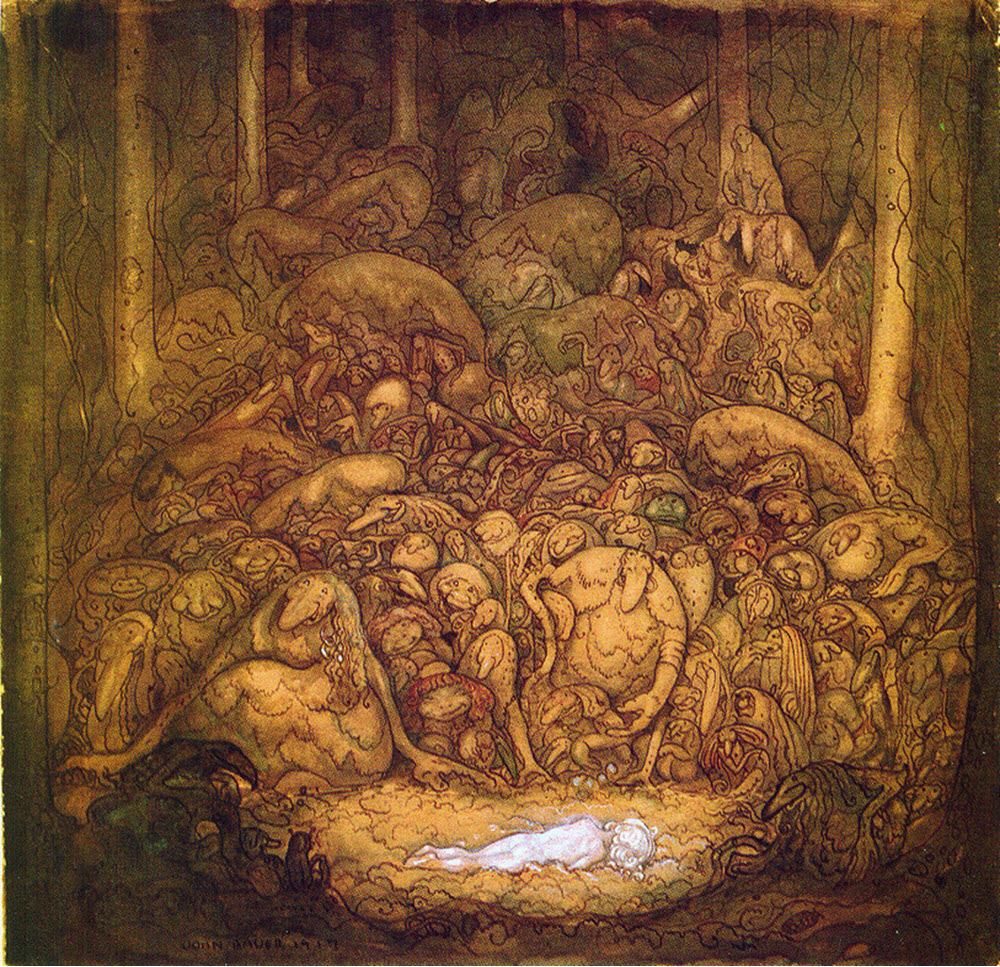 Bauer´s first exhibit took place at Valand in Gothenburg in 1905, where he was one of eleven debutantes. His oil painting Sagoprinsessan (The Fairytale Princess) where he depicted Ellqvist was exhibited both at Valand and, the following year, in Norrköping, before being purchased by a private collector. Today it is on display at Jönköpings länsmuseum.

The first edition of the anthology of Swedish legends and fairytales (”Bland tomtar och troll”) was published right before Christmas of 1907. It propelled Bauer into fame, as his illustrations became extremely well-liked by the public and he was widely hailed as the country´s main fairytale illustrator. A new edition of the anthology was subsequently published right before Christmas each year, but Bauer only illustrated them until 1914.

As a married couple, Bauer and his wife travelled to Germany and Italy to study art, with the financial support of Bauer´s parents. Their choice of destinations raised some eyebrows, as most Swedish artists of the time sought to go to France.

After the outbreak of WWI, Bauer quit his job with the fairytale anthology as he felt that ”the trolls” were limiting his artistic development, and he subsequently embarked on a period of extensive experimentation, seeking to take his art in new directions. Among other things, he painted frescos, made cubist drawings and wrote scripts for the theatre. His paintings were exhibited, but failed to bring him a reliable income.

Bauer´s final large work was a painting for the auditorium at Karlskrona flickläroverk. Completed in 1917, it depicts the godess Freja. Bauer´s wife Ellqvist modelled for the painting.

In November 1918, the Ellqvist-Bauer family was getting ready to move from their home in Bunn, Småland to their newly finnished house in Stockholm. The month before, a horrific railway accent had claimed the lives of over 40 people in Sweden and the family was therefore reluctant to travel by train. Instead, they decided to make the journey by boat.

On 20 November, 1918, John, Esther and their three-year-old son embarked on the steamship S/S Per Brahe on lake Vättern. The boat carried heavy cargo that wasn´t properly stoved and when the ship encountered a storm on the lake it sank, drowning everyone onboard. Eight passengers and 16 crew members lost their lives, including the Bauer family.

The ship was salvaged four years later and the remains of the Bauers were buried at the cementery Östra kyrkogården in Jönköping in August 1922.